In today’s world, it’s certainly not all that uncommon feeling vulnerable, uncomfortable with our current surroundings, and sensing pending danger. After all, statistics show growing safety concerns with a handful of common situations.

Intimate partner violence affects more than 12 million people annually. No More – a non-profit organization dedicated to ending domestic violence and sexual assault – calculates that 1 in 4 women and 1 in 9 men experience violence from their partners at some point during their lifetimes.

Traveling Away from Home

According to the CDC, violence – including homicide – is a leading worldwide public health problem that affects US citizens traveling, working, or residing internationally. Each year, 1.6 million people lose their lives to violence, and Mexico, the Philippines, Jamaica, and Haiti have the highest number of homicide deaths among American travelers.

More than 20 million students in the U.S. will head to college this fall. Unfortunately, with so many students, dorm rooms, and valuables, even America’s safest college towns experience crime, including burglaries, thefts, or assaults.

The numbers can be staggering. According to the Bureau of Justice Statistics, one in four female college students in the U.S. has reported being the victim of a sexual assault – and many other incidents of this kind go unreported.

Crime and danger is a global epidemic. Hate crimes now exceed 200,000 victims each year in the U.S. alone. The FBI reports that the number of hate crimes in America has been rising significantly – indicating an increase of more than 17 percent in the number of reported incidents in 2017 over the previous year, the third consecutive year there has been an increase in these reported incidents.

All across the globe, natural disasters – such as earthquakes, hurricanes, wildfires, and floods – are on the rise too. According to EM-DAT records, the number of annually reported natural disasters grew steadily during the final three decades of the twentieth century. In 2018, the total annual disaster count was more than three times higher than in 1970.

Increased Personal Security in the Palm of your Hand

The new and improved GWEN Alert safety app is a powerful resources that offers peace of mind and access to immediate assistance. Download the free app today on iPhone or Android, and then enter your

– the five most-trusted people in your personal network. These individuals will be alerted when you’re in a dangerous situation and trigger the safety app with a click of a button.

Be SMART ABOUT YOUR SAFETY. Download the GWEN Alert safety app on your smart phone today! 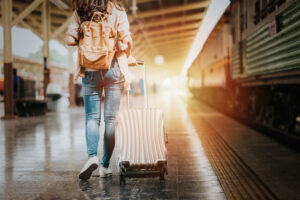